As we are now into the second half of the year, we thought it would be fun to run some numbers on the most popular hotels and routes using our own customers as the source. So here goes.

The three most popular break points (stopping off or starting/ending, excluding the source):
1) Lechlade
2) Oxford
3) Cricklade

The most popular routes:
1) Source to Cricklade
2) Cricklade to Lechlade
3) Newbridge to Oxford

We’ll have another look at the end of the year.

Another week with minimal rain has meant the Path remains dry. We were able to take a look at the field approaching North Meadow. Although it’s quite muddy, there’s nothing that can’t be avoided.

Diversions are now in place past Waterhay in the Cotswold Water Park as work on the Path takes place. You’ll be glad to know that the diversions make no appreciable dfference to the mileage. Further details available on our Facebook group.

With the most of the country hooked on either football or Wimbledon, new events seem to be a little thin this week. However, we can announce that Goring Gap Wildlife, who offer birdwatching experiences, have launched (excuse the pun!) a river experience. Spaces are available on Sunday 25th of July and Saturday 14th of August. More on Goring Gap Wildlife can be found on our Experiences page.

For a list of scheduled events and festivals, see our events page.

Despite the improving Covid situation, Travelodge do not seem to be relenting on their policy of not storing bags. The only other hotel we know of that will not hold bags is Cosenors House, Abingdon. Do bear this in mind if planning to use our bag transfer service. Hopefully all will be back to normal by July 19.

Perhaps one of the most original hotels we visited this week was Mollie’s Motel & Diner. This is an American-style hotel and can be found in the most unlikely of places – close to Tadpole Bridge. The hotel is clean and friendly with 24 hour reception; room rates are very competitive; and the diner opposite offers good value meals. The only disadvantage is that it’s about 2 miles from Tadpole Bridge. It can be accessed using public footpaths through the village of Buckland. Alternatively Faringdon Cars will collect you and bring you back – which will still cost less than staying the night at the Trout!

On Saturday we celebrated the 125th anniversary of the publication of the Kelmscott Chaucer, a reprint of Chaucer’s work by William Morris. Morris’s home, Kelmscott House, is close to the Thames near Lechlade.

There was a nice feature on the BBC about the Maidenhead station canopy which has been relocated to Wallingford. With the implementation of Crossrail, the canopy had to be dismantled. It was then moved to the now redundant station at Wallingford and can be seen as part of the Cholsey and Wallingford railway, run by enthusiasts.

And staying with Maidenhead station, did you know that there is a statue there of Sir Nicholas Winton? Sir Nicholas smuggled 669 children, destined for concentration camps, out of Czechoslovakia in 1939. He lived in nearby Pinkneys Green.

This week marked the anniversary of the destruction of the Globe Theatre by fire in 1613. It was caused by the firing of a stage cannon during a performance of Henry VIII. The roof was thatched. The Thames Path (right bank) passes the new Globe Theatre at Bankside, which is a reconstruction and not precisely on the same spot. The reconstruction was founded by actor Sam Wanamaker. 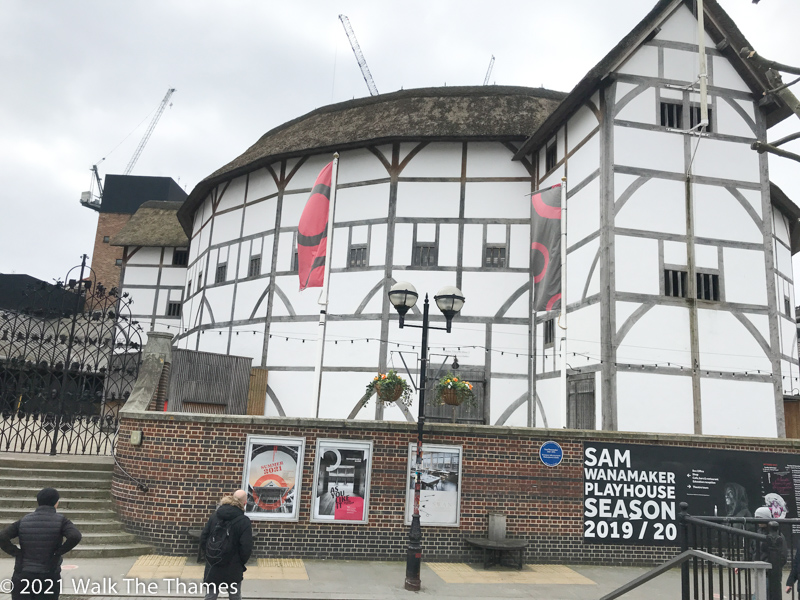 The Earth Lab at Earth Trust, just off the Thames Path on the other side of Wittenham Clumps, is now open. The lab is the new home for environmental education sessions. 60 pupils from a nearby school were the first to experience the facilities when they attended an Ancient Britain workshop.

With one party moving upstream and another starting off at Cricklade, we have been up and down almost the entire length of the Path this week. Here are some highlights. From top left (clockwise): North meadow, Cricklade; Oakley Court Hotel, Windsor; calves, near Cricklade; the Plough, Clifton Hampden.

If you think an American Motel & Diner near Tadpole Bridge is surreal, how about a Christmas shop in Lechlade in July! Yes, if you wander far enough down the high street you can step into the Cotswold Christmas shop which is open all year round.

Bye for now and hope to see you on the trail!