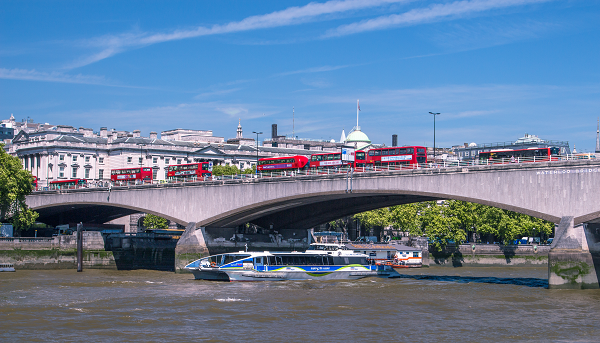 As you might expect this is the least well-served of all the sections on the route.  Oxford itself has excellent connections with trains to London and Birmingham.  The only other station that is close to the Path is Kemble, which is very close to the source.  There are no train services to locations between the source and Oxford. However, there are bus services from Cricklade and Lechlade to Swindon 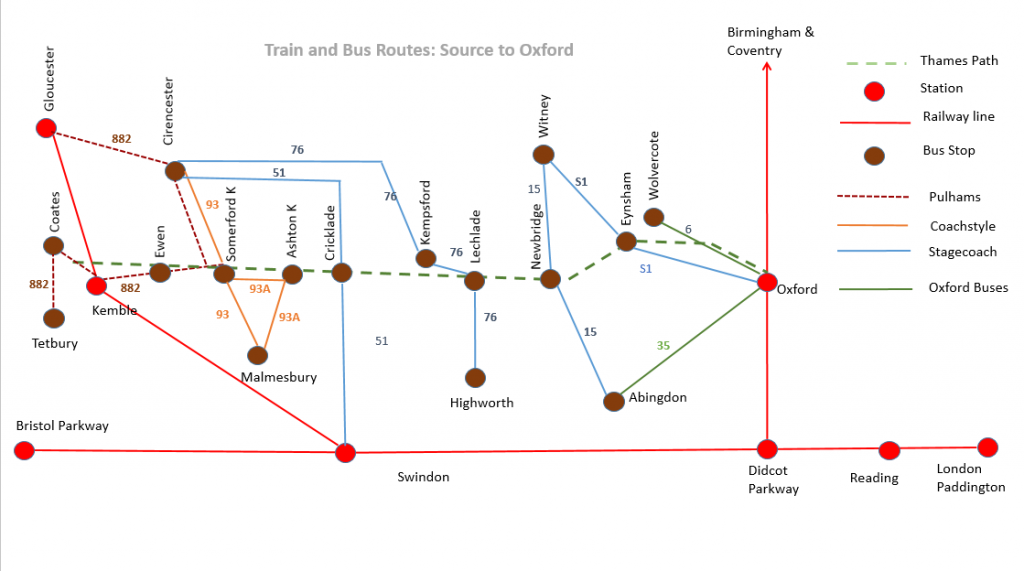 The railway follows the river for much of this section except that the Thames makes a large loop around Abingdon whilst the train follows a direct route.

Also note that Culham and Appleford stations are both some way from the Path.  And the Thames Path at Appleford is on the other side of the river with no bridge. There are no train services at both these stations on Sundays.

From Cholsey to Reading, the Path and the train line meet each other at regular intervals. 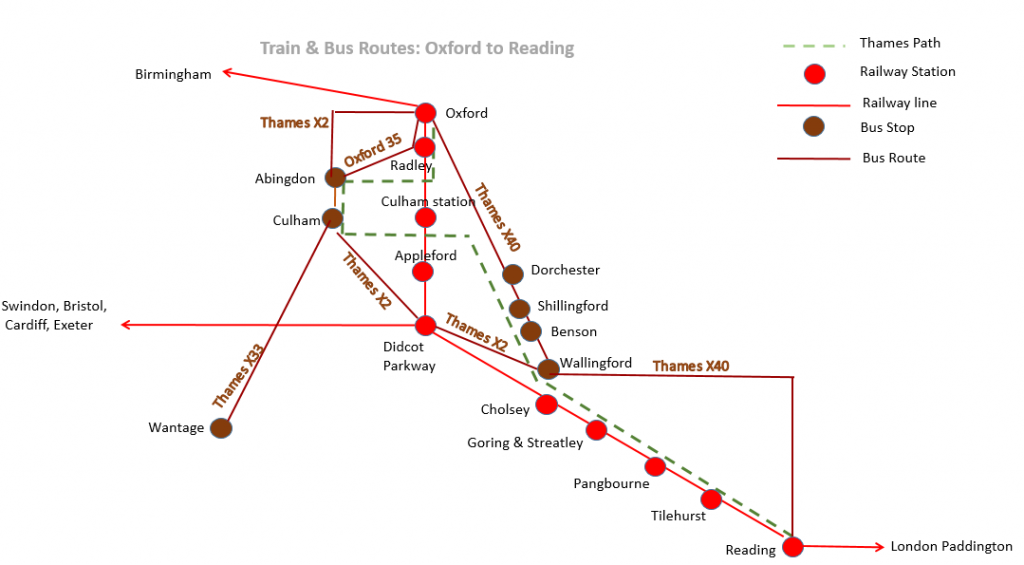 This section is well served with stations. The longest section without a station is Henley to Marlow  which is just 9 miles.

Windsor has 2 stations: Central, which is a branch line from Slough; and Riverside which connects with other Thames Path stations downstream. 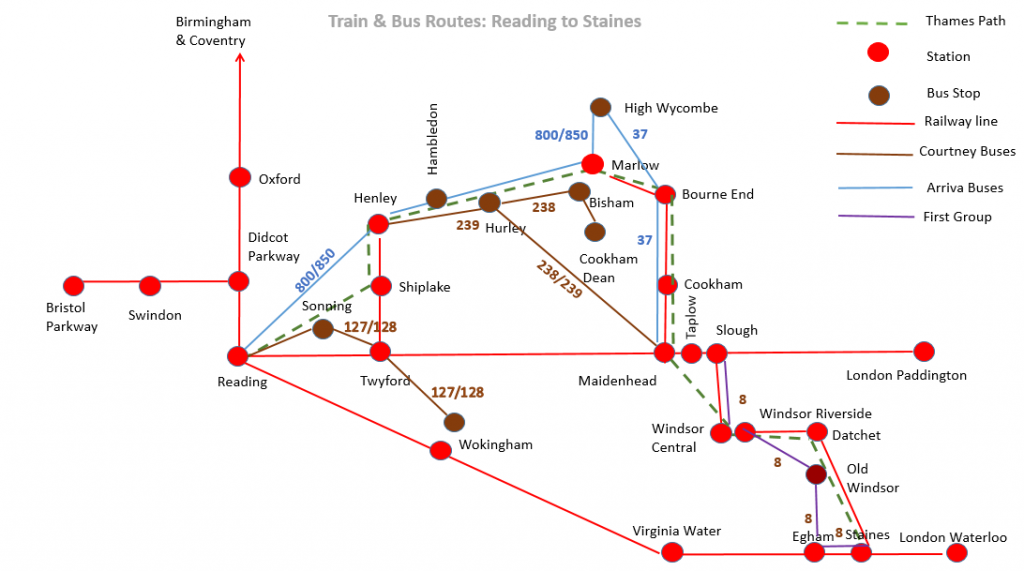 As you approach the outskirts of London, the train stations become quite frequent. Up until this point, trains have been served by Great Western Railway from London Paddington. Now we are in South-West Railway territory operating out of Waterloo.

Because the stations along the Thames Path are often on different lines, it’s not always straightforward to move between stations along the Path. For instance, a train from Hampton Court to Kingston, a walk of just 3 miles, can take half an hour. 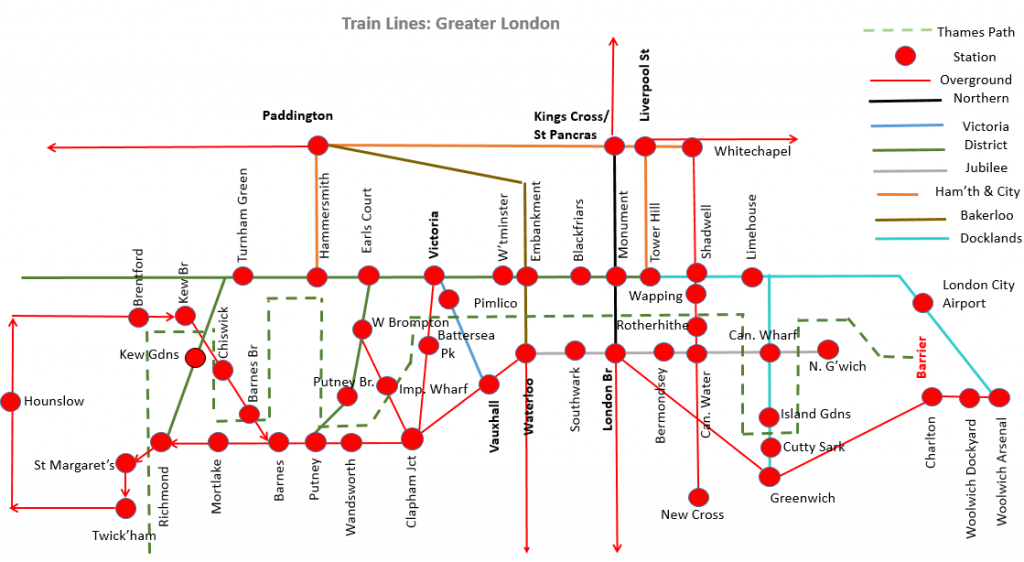 The final section of the Thames Path is well served by trains as the diagram below illustrates. A combination of rail and tube will get you up and down the path although you may have to change lines frequently.

The left bank is not quite as well serviced until you reach Westminster when the district and circle lines run parallel to the river until Tower Hill. The Jubilee runs in a similar direction between Waterloo and London Bridge.

Greenwich can be reached either by rail from London Bridge, or via the Docklands Light Railway which provides glorious views as it winds its way around the glass towers of Canary Wharf.

The nearest station to the Thames Barrier is Charlton where you can catch a train back to Greenwich and London Bridge. 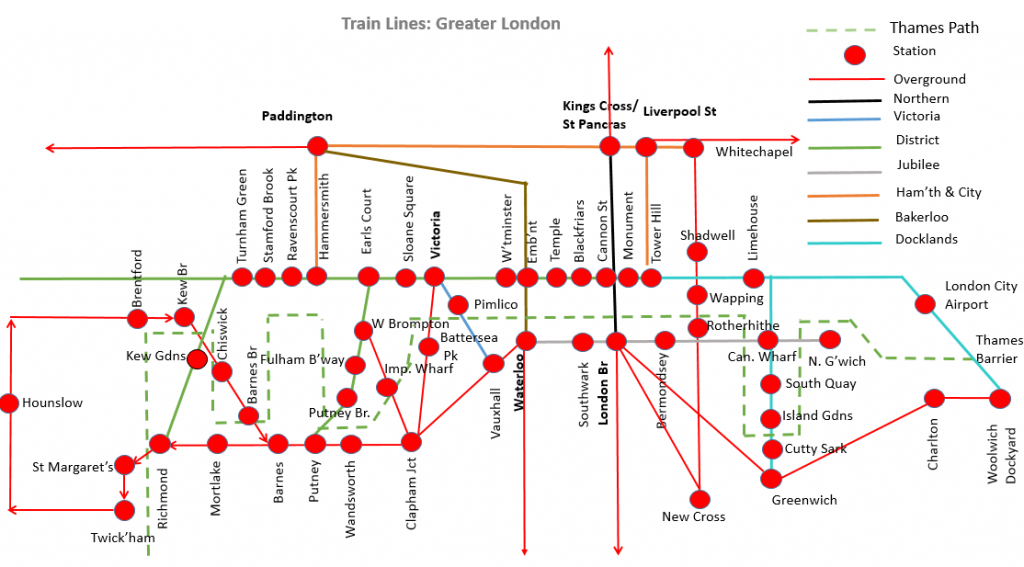